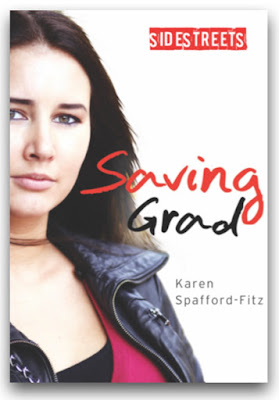 It's been beat out of her by her alcoholic, cocaine-abusing step-dad, Duncan, who has made her life and that of her mother Sophie a misery for two years.  Her mother is reluctant to leave, accustomed to the fine home and life style of wealth, but Vienna sees beyond the facade of a good life, apprehensive what could eventually happen if they stay.  When Duncan has a fall that lands him in hospital, Vienna is determined to pack themselves up and flee.  They head to Edmonton where, with the help of an outreach worker, they get a basement apartment and begin to make a new life, slowly.

Though initially happy to drown her sorrows, Sophie gets a job at a Starbucks and insists that Vienna get registered for her final year of high school.  To make it more difficult for Duncan to find them, Vienna decides to go by Vienna Fleury, using the last name of her Métis grandmother, Mémère.  Sophie and her mother may not have spoken for years–since they'd argued about her marriage to Duncan–but Vienna misses Mémère and calls her occasionally to keep her from worrying, though she never reveals where they are.

At her new high school, Vienna tries to stay under the radar but a friendly classmate named Mandy draws her into the school's social scene, enlisting Vienna's help on the grad party committee. Although Vienna begins to enjoy school and her mother is establishing a support system and relishing her independence, regardless of how financially strapped they are, you know things have to go awry.  Saving grad may be the least of Vienna's worries.

As part of Lorimer's SideStreets series of hi-lo (high interest-low vocabulary) books, Saving Grad is a fast read in plotting and word count.  But don't mistake a hi-lo read for a lesser story.  Author Karen Spafford-Fitz capably creates an intense plot of relationships between family and friends which can be positive and negative, supportive or destructive, and she makes sure to take us along on that bus ride.  Like Vienna and Sophie ending up in Edmonton in the middle of winter, the destination may not be an easy one at first but it is a fulfilling one in the end.  Saving Grad is bigger than the indisputable distress of physical abuse.  It's a story of resilience and strength and making something good out of something bad.  Karen Spafford-Fitz makes Saving Grad into saving Vienna and Sophie and others too.
Helen K
Share